Crossing the road on my daily walk this morning, I noticed that the asphalt had been repaired in a surprisingly playful way and on such a scale that it could not be a coincidence.

The intriguing designs created by the roadworkers reminded me of Eduardo Chillida‘s art, whose ‘language’ is so recognisable and constant both on paper and in his sculptures.

Chillida has even designed a poster for the 1972 Olympic Games in Munich: 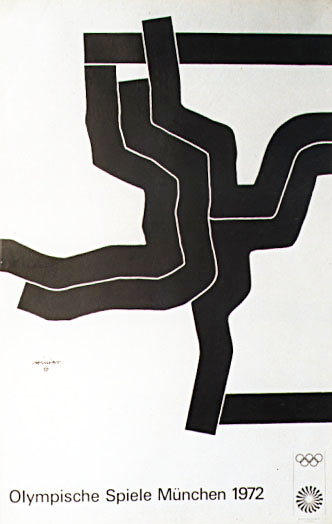 As I continued my walk even the shadows of the trees on the road were speaking a similar language.

And now I have found that iron has been playing a steady role in Chillida’s work.

He set up his own smithy, worked in a foundry to cast his sculptures himself instead of having them cast like so many other artists do, and he experienced with different patinas to give (some of) his sculptures a rusted look. Wherever I go these days I seem never to stray very far from my own iron!

In a 1995 interview in Beaux-Arts Magazine he remarks ‘il faut laisser la matière s’exprimer’, one should give the material the room to express itself.

I found something related to this in my work notes for my book Living Iron about the ancient belief that minerals need time to grow in the earth.

A form requires space and time to take shape. So do our thoughts. So does a book.